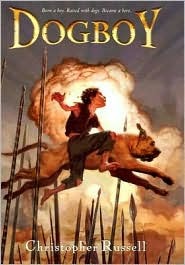 Brind is a 12-year-old boy that was abandoned as a baby, and left in a dog kennel at Sir Edmund’s manor.  The year is 1346, shortly after the Hundred Years War between England and France began.

Brind has an almost spiritual connection with the huge Mastiff hunting dogs that he shares kennels with. Brind and the lead dog, Glaive, are best friends.  However, Brind’s life is made very difficult by Sir Edmund’s jealous huntsman, Tullo.

When Brind and half of the pack of Mastiffs join Sir Edmund, his page, and his hunstman on the military campaign against France, the book becomes a suspenseful page-turner. Brind and Glaive become separated after a bloody battle.  As Brind searches for Glaive, he meets a 10-year-old French girl refugee named Aurelie. The two become reluctant companions on a perilous journey trying to survive the brutalities of war, and the crazed people that are in the war.

Series: Dogboy is the first in a series.  The second book, Hunted, was published in 2007.