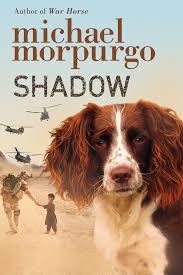 Aman and his mother escape Afghanistan with the help of Shadow, an Army sniffer dog, to live in England.  After living in England for six years, they are denied asylum and have to go back to Afghanistan.  Aman’s best friend in England, Matt, asks his grandfather to go to the immigration removal center to talk with Aman.  Aman tells Matt’s grandfather his harrowing story. Outraged, Matt’s grandfather knows he has to do something to get Aman and his mother granted asylum.  This middle grade war story, originally published in Great Britain in 2010, is braided with compassion, brutality, and perseverance.  Morpurgo, whose many books are often about war and animals, has postscript information about the Afghanistan War, sniffer dogs, and the Yarl’s Wood immigration removal center.