Trapped: How the World Rescued 33 Miners from 2,000 Feet Below the Chilean Desert by Marc Aronson 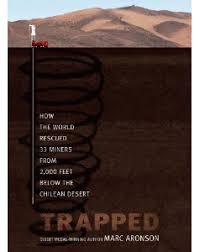 In August, 2010, 33 miners were trapped 2,300 feet underground in a Chilean mine for over 60 days.  Trapped details the miners struggle to stay alive, along with the rescuer’s challenges and the family’s unimaginable fear of never seeing their loved ones again. Readers will be hooked by the miner’s plight and the race to rescue them.  It was fascinating how the rescue effort brought experts in from all over the world. There are quite a few interesting and helpful drawings and pictures that complement the text. In the back, there is a timeline, glossary, “The World of the Miner” and an interesting author note titled “How I Wrote This Book” which gives helpful advice to student researchers.  Aronson is an award-winning author, but I did think that the writing style in this book was a little distracting.  The author sometimes glossed over interesting areas yet gave more detail to areas that didn’t need it. I recommend this book for students in grades 6-8.

Posted in Nonfiction | Tagged chile, mine, non-fiction | Leave a comment

On My Honor by Marion Dane Bauer

This short book packs a powerful punch!  Joel and Tony are best friends.  Tony has a very adventurous spirit, which often times makes Joel feel uncomfortable.  Sometimes Joel wonders why they are best friends, but truth is, Joel finds everyone else boring in comparison.

Tony really wants to climb the bluffs at Starved Rock.  Joel is scared and doesn’t want to do it.  Someone died trying to climb them last year.  Joel tries to convince Tony to go swimming instead, but Tony won’t budge.

While Joel and Tony were talking about Starved Rock, Joel’s Dad comes outside.  Joel sees this as the perfect opportunity to get out of going because he knows that if he asks his Dad if he can go, his Dad will say no.  Even though Joel knows Tony will get mad at him for asking his Dad, Joel goes ahead and asks him if they can ride their bikes out to Starved Rock.  To Joel’s surprise, his Dad says yes.

On their way out to Starved Rock, Tony stops at a bridge that is over the dangerous Vermillion River.  Tony dares Joel to go in. Joel is a good swimmer, but the Vermillion is so dangerous!  Caving in to Tony’s relentless daunting, Joel goes in after Tony.

To find out what happens next, read On My Honor.  It’s a suspenseful, gripping story that will be sure to leave a powerful impression with you long after you finish the book.

Link to Harvest Park Library catalog: On My Honor

Homeless Bird, a National Book Award winner,  is a beautifully written story about a 13-year-old Hindu girl, Koly, living in India.  As is the custom, her marriage is arranged for her.  Unbeknownst to Koly and her family, the young man, Hari, himself only 13-years-old, is very sick, and the only reason his parents want him to get married is so that they can get a dowry (money) from Koly’s family to be able to pay for him to make the journey to the suppposed healing waters of the Ganges River.

Koly’s sass (Mother-in-law) treats Koly very poorly.  Between Hari being very sick and his mother being so cruel to Koly, she becomes very lonely. She finds hope in embroidery, Hari’s sister, and Hari’s father, who reads with her.

Events take a turn for the worse.  Koly’s sass tells her she is taking her to live in Delhi, but instead Koly is suddenly alone in a city with thousands of widows.  Is this how the rest of her life is going to be?

Beautifully written, Koly’s story is unimaginable, yet hopeful. I couldn’t imagine how lonely she was.  Yet she perservered. Highly recommended.

Between Shades of Gray by Ruta Sepetys

Can you imagine having your whole family brutally forced to leave your home and taken by train to a forced labor camp?  That’s what happened to 15-year-old Lina, in the book Between Shades of Gray by Ruta Sepetys.

It’s summer in 1941 in Lithuania.  After putting her nightgown on, 15-year-old Lina sits down at her desk to write her cousin a letter.  She hears a banging on the front door.  It’s not a polite knock, but an urgent and violent banging.  Her life is about to change forever.The Soviet Secret Police have given Lina, her mother, and her younger brother 20 minutes to pack some belongings in suitcases to take with them. They are taken by a cramped and filthy train to a forced labor camp and then to another forced labor camp in the Siberian Arctic that has no shelter.  Her father has already been sent to to a Soviet concentration camp.

What happens over the next decade is unimaginable.  Yet, through it all, Lina holds on to hope through her drawings, and a budding relationship with another captive.  Between Shades of Gray is a must-read book that tells the very important story of the reign of terror that Joseph Stalin held over Lithuania and other Baltic countries during World War II.

Series: This book is not part of a series.

Link to Harvest Park Library catalog: Between Shades of Gray by Ruta Sepetys

Now Is The Time For Running by Michael Williams

This book is not for the faint of heart.  It is an intense story about two brothers, Deo, who is 15, and Innocent, his older disabled brother, running for their lives in modern war-torn Zimbabwe.  The entire village, including their Mom and Grandfather, were killed by the army.  Deo and Innocent narrowly escaped.  All they have left is each other, Deo’s love of soccer, and Deo’s handmade soccer ball, stuffed with money his Mother had hidden in their hut. They escape to another village where a family friend lives.  It’s not safe to be there either, so he tells Deo to go see a woman who can get them to South Africa.  Deo spends all of his money on a risky passage to South Africa, where he hopes his brother and he will be safe.  They are not welcomed in South Africa because the people there are struggling and they don’t want refugee’s taking their jobs and food.  They go from dangerous town to dangerous town looking for a safe place.  When violence takes the life of his older brother, Deo is defeated.  He turns to drugs, and it looks like there is no hope for him.  His love of soccer ends up being his salvation and readers will be rooting him on all the way to the last page.

To find out what happens to Deo, read the gut-wrenching and violent, yet heart-warming and inspirational book Now Is the Time For Running by Michael Williams.

Link to Harvest Park Library catalog:  Now Is The Time For Running

Can you imagine being a 13-year-old only child and having your parents tell you that you will soon have a new baby brother that’s an eight-day-old Chimpanzee ? How would you feel? Excited, angry? To make matters worse, your family moves far away from all the friends you’ve had your entire life.

Meet Ben, a 13-year-old boy who, well, is now an older brother to a baby Chimp named Zan. Ben’s father, a well-known behavioral scientist, has moved his family across Canada to pursue his latest research project: a high-profile experiment to see if chimpanzees can learn advanced language skills. Ben’s parents tell him to treat Zan like a little brother. Ben doesn’t want to, but agrees to in the end. Ben’s just glad that at least now he’s not the only one his father’s going to pay attention to.

It isn’t long before Ben is Zan’s favorite, and Ben starts to see Zan as truly a brother, not just an experiment. His father doesn’t want Ben to see Zan as anything more than an experiment. Soon Ben is forced to make a decision between between obeying his father or saving his brother from an intolerable fate.

Half-Brother isn’t just a story about a boy and a chimp. It’s about families, the way we judge each other, the way choices that appear easy can be very difficult, and how you can’t always do right by those you love. In the hands of this excellent author, Kenneth Oppel, it’s a book you won’t soon forget.

Series: This book is not part of a series.

I’m pulling for you.  I liked you the moment I met you.  You are a 12-year-old girl who deserves normal.  Your Mom mostly drove me nuts-I wanted to step into the book and shake her, telling her she needed to be there for you.  Other times, I just felt really sorry for her.  It’s a wonder sometimes why some people have kids if they can’t give them the love, safety, and emotional support that kids need and want.

Addie, you held on.  You weren’t a pushover. You recognized the weaknesses that the people you loved (including yourself) had, and still accepted and loved everyone.  You are wise beyond your years.

Addie, you shared with us hope, strength, survival, and friendship.  Thank you.  May life bring you all that you deserve!

P.S.  I think you do have the Love of Learning!